biography of bishop michel kassarji, head of the chaldean community in lebanon

Surmounting the Episcopal shield, is the Chaldean Ecclesiastical Biretta, that the clergy wears outside the Holy Mass and is part of the official uniform, with 12 tassels, six on each side in three rows on either side of the shield, all in green (color of the Office of Bishop).

The Episcopal shield is made up of four sections:

– Upper quadrant, Red, the emblem of the Chaldean Community in Lebanon,

– Dexter quadrant, Or, the icon of the Archangel Michael, Patron Saint of his Excellency.

– Sinister quadrant, Or, the scales of justice, indicating the specialization of his Excellency in Ecclesiastical Law.

– Lower quadrant, White, the vine, symbol of the city of Zahle-Lebanon, the birthplace of his Excellency, and the rivers symbol of Mesopotamia, the home of the Chaldean Church of the East.

Many colors make up the Episcopal Coat of Arms: Green, symbol of renewal, Red, color of martyrdom and bloodshed, Yellow and White, colors of the Vatican state flag and symbol of purity and light.

The scroll with the Episcopal Motto beneath the Episcopal Coat of Arms, written in Chaldean, is a scriptural verse that His Excellency wanted to be a light and a road map: 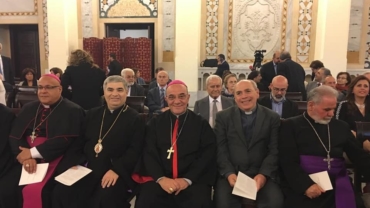 A meeting on the occasion of the Annunciation of the Virgin

The head of the Chaldean Church in Lebanon, Bishop Michel Kassarji, participated in the thirteenth festive meeting “Together around Our Lady Mary” called by the Lebanese Prime Minister, Saad Hariri, on the day of the declaration of the feast of the Annunciation of the Virgin Mary as a national patriotic…

Bishop Michel Kassarji, Pastor of the Chaldean Diocese of Beirut in Lebanon, participated in the Christian that was held in, at the invitation of the Maronite Patriarch Cardinal Bechara Boutros Al-Rahi, with the participation and presence of all the Patriarchs and Bishops of the different churches in Lebanon. The meeting… 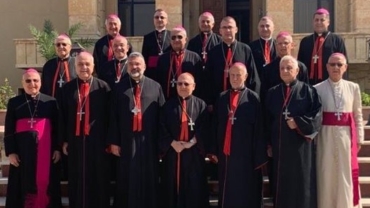